We Americans love to tell ourselves a story about how Black people were oppressed and then the Civil Rights Movement happened and Rosa Parks refused to move and Martin Luther King gave a speech and then racism was, if not ended, abated. But not only is that a narrative much more about ameliorating white fragility about their own complicity in racism than true, but it also just covers up the fact that on schooling, policing, poverty, and so much else, the structural conditions of racism are just as bad as they were at the end of World War II. Take the racial wage gap for instance:

The black-white wage gap shrunk substantially from 1950 to 1980, and especially during the 1960s. Civil-rights laws and a decline in legally sanctioned racism most likely played some role. But the main reasons, Mr. Charles said, appear to have been trends that benefited all blue-collar workers, like strong unions and a rising minimum wage. Because black workers were disproportionately in blue-collar jobs, the general rise of incomes for the poor and middle class shrank the racial wage gap.

One law was especially important: the 1966 amendment to the Fair Labor Standards Act. When Congress passed the original law, during the New Deal, it deliberately exempted service and other industries with many black workers from the minimum wage. “Just expanding the minimum wage to those industries,” Ellora Derenoncourt, a University of California, Berkeley, economist, said, “boosted the relative wages of black workers substantially.”

Since 1980, however, the wage gap has increased again, and is now back roughly to where it was in 1950. The same economic forces are at work, only in the opposite direction: The minimum wage has stagnated in some states, unions have shrunk, tax rates on the wealthy have fallen more than they have for anyone else and incomes for the bottom 90 percent — and especially the bottom half — have trailed economic growth. Black workers, again, are disproportionately in these lower-income groups.

It’s not just that we need to revisit Reconstruction as the place where building positive movements for justice in American history begins (arguably anyway). It’s that we need a Third Reconstruction, to borrow from historians going back several decades, to even begin to move this nation toward something like equality. We aren’t even close to it. 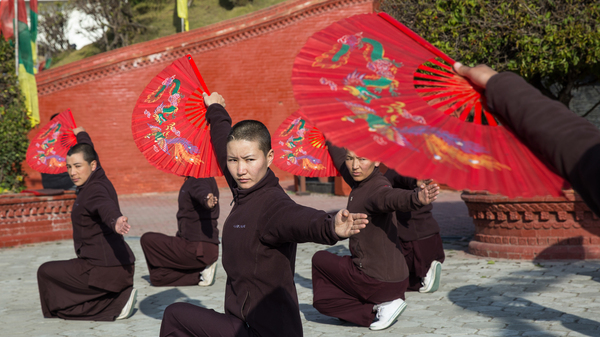 They call themselves the "fearless ones." They've built a reputation not just for their martial arts prowess but for teaching girls to stand up for their rights. And they love watching horror movies.

NASA’s most iconic building is 55 years old and just getting started by Eric Berger
Sunday July 5th, 2020 at 12:30 PM

At the time, the "Launch Operations Directorate" under Wernher von Braun and his team of German scientists was based at Marshall. But NASA's leaders realized they would need their own facilities in Florida alongside the Cape Canaveral Air Force Station. So they created a new "Launch Operations Center" on nearby Merritt Island. President Lyndon B. Johnson would rename the facility Kennedy Space Center a week after President John F. Kennedy's November 1963 assassination in Dallas.

As plans for the Apollo Program developed, NASA also soon realized it would need a large building in which to assemble the Saturn V rocket that would power the Moon landings. Work began on what was then known as the Vertical Assembly Building (VAB), where the big rocket would be stacked in a vertical configuration before rolling out to the launch pad.

The 160-meter-tall building was topped off in 1965 and completed in 1966. Construction photos of the VAB's development—the building required almost 90,000 metric tons of steel—are as incredible as those of the finished building itself. But NASA officials wanted to make clear at the time that this building was not an end in itself. Rather, it was a means to an end.

"This building is not a monument," said Kurt Debus, the German rocket scientist who supervised construction of the Florida facilities, in 1965. "It is a tool, if you will, capable of accommodating heavy launch vehicles. So if people are impressed by its bigness, they should be mindful that bigness in this case is a factor of the rocket-powered transportation systems necessary to provide the United States with a broad capability to do whatever is the national purpose in outer space." 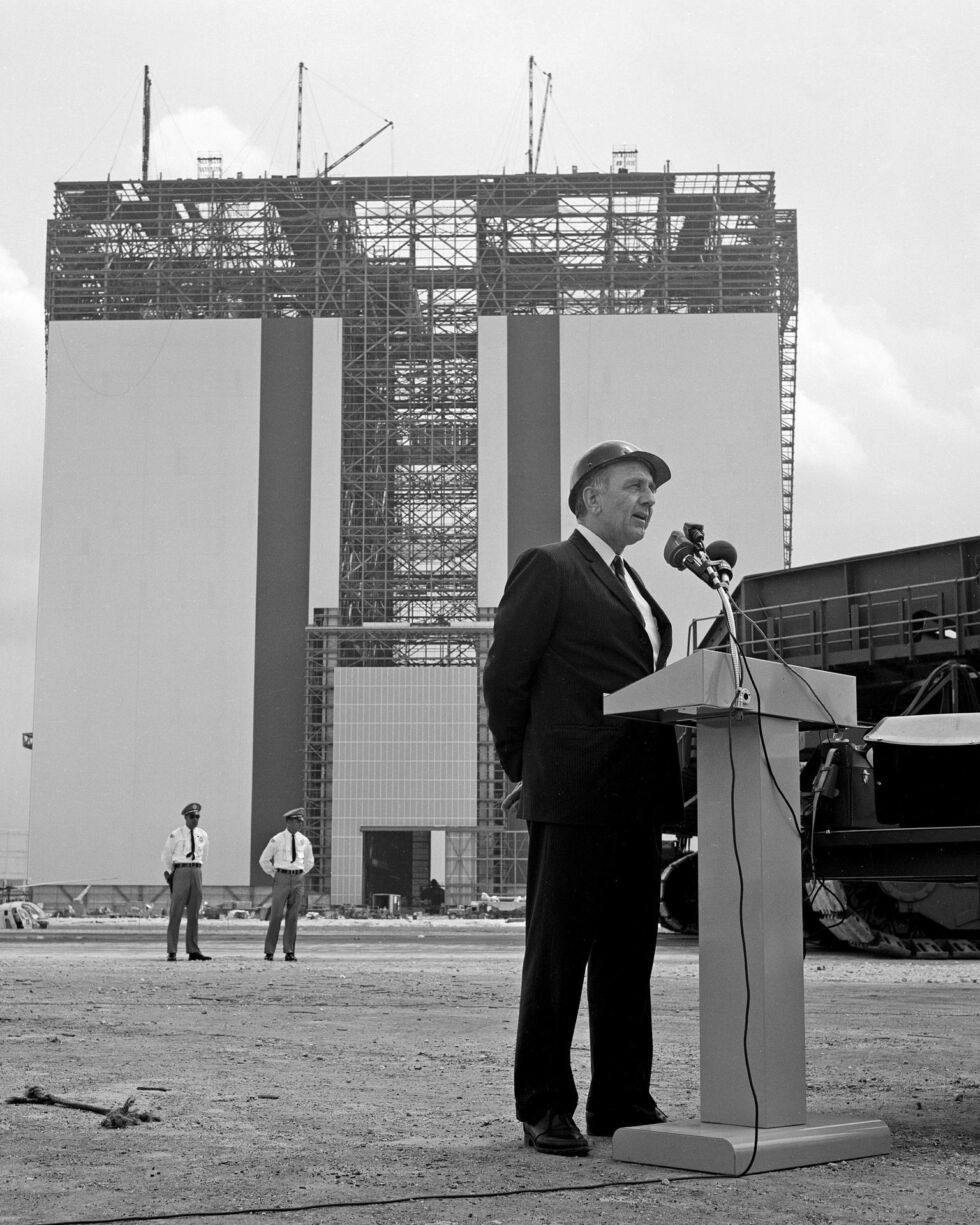 Center Director Kurt Debus speaks at the "topping off" ceremonies for the Vehicle Assembly Building in 1965. (credit: NASA)

Even before it was completed, the VAB's name was changed from Vertical to Vehicle Assembly Building because it was felt that the building might well be used for launch vehicles other than the Saturn V. And indeed it would, serving the space shuttle from 1981 to 2011. After returning to Earth, the space plane would roll into the VAB for refurbishment after each mission.

Following the shuttle's retirement nine years ago, the cavernous building sat empty for a time. But as Debus noted back in 1965, the building was built to serve the nation's large rockets and would soon be called upon again. The VAB has four high bays, which will be used for various purposes during the coming decade. One will be used to stack NASA's big Space Launch System rocket, and another is presently in use for Northrop Grumman's Omega rocket.

The future of both these large rockets is far from certain—each is likely to only exist as long as the government foots the bill (NASA for the SLS rocket, the US Space Force for Omega)—but as rockets come and go, the VAB remains the same. 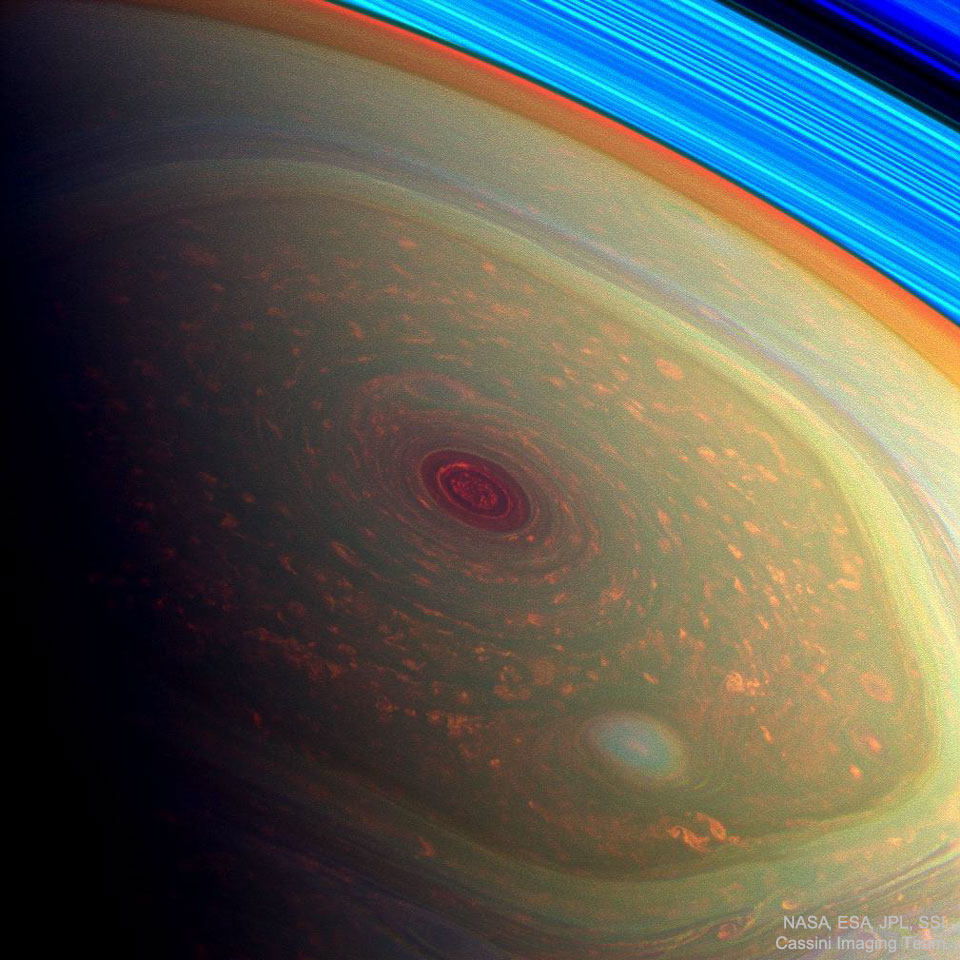 Saturns Northern Hexagon Why would clouds form a hexagon on Saturn? Nobody is sure. Originally discovered during the Voyager flybys of Saturn in the 1980s, nobody has ever seen anything like it anywhere else in the Solar System. Acquiring its first sunlit views of far northern Saturn in late 2012, the Cassini spacecraft's wide-angle camera recorded this stunning, false-color image of the ringed planet's north pole. The composite of near-infrared image data results in red hues for low clouds and green for high ones, giving the Saturnian cloudscape a vivid appearance. This and similar images show the stability of the hexagon even 20+ years after Voyager. Movies of Saturn's North Pole show the cloud structure maintaining its hexagonal structure while rotating. Unlike individual clouds appearing like a hexagon on Earth, the Saturn cloud pattern appears to have six well defined sides of nearly equal length. Four Earths could fit inside the hexagon. Beyond the cloud tops at the upper right, arcs of the planet's eye-catching rings appear bright blue.
Read the whole story 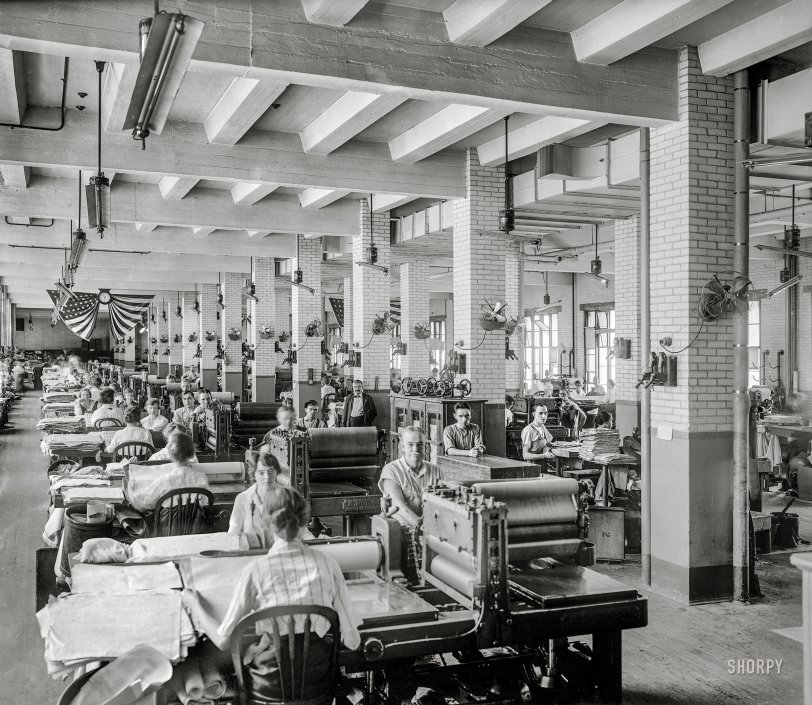 But another less often remarked consequence of the Black Death was the rise of wealthy entrepreneurs and business-government links. Although the Black Death caused short-term losses for Europe’s largest companies, in the long term, they concentrated their assets and gained a greater share of the market and influence with governments. This has strong parallels with the current situation in many countries across the world. While small companies rely upon government support to prevent them collapsing, many others – mainly the much larger ones involved in home delivery – are profiting handsomely from the new trading conditions.

The mid-14th Century economy is too removed from the size, speed, and interconnectedness of the modern market to give exact comparisons. But we can certainly see parallels with the way that the Black Death strengthened the power of the state and accelerated the domination of key markets by a handful of mega-corporations.

The sudden loss of at least a third of Europe’s population didn’t lead to an even redistribution of wealth for everyone else. Instead, people responded to the devastation by keeping money within the family. Wills became highly specific and wealthy businessmen, in particular, went to great lengths to ensure that their patrimony was no longer divided up after death, replacing the previous tendency to leave a third of all their resources to charity. Their descendants benefited from a continued concentration of capital into a smaller and smaller number of hands.

At the same time, the decline of feudalism and the rise of a wage-based economy following peasant demands for better labour conditions benefited urban elites. Being paid in cash, rather than in kind (in the granting of privileges such as the right to collect firewood), meant that peasants had more money to spend in towns.

This concentration of wealth greatly accelerated a pre-existing trend: the emergence of merchant entrepreneurs who combined trade in goods with their production on a scale only available to those with significant sums of capital. For example, silk, once imported from Asia and Byzantium, was now being produced in Europe. Wealthy Italian merchants began to open silk and cloth workshops.

These entrepreneurs were uniquely positioned to respond to the sudden labour shortage caused by the Black Death. Unlike independent weavers, who lacked the capital, and unlike aristocrats, whose wealth was locked up in land, urban entrepreneurs were able to use their liquid capital to invest in new technologies, compensating for the loss of workers with machines.

In southern Germany, which became one of Europe’s most commercialised areas in the late 14th and 15th Centuries, companies such as the Welser (which later ran Venezuela as a private colony) combined growing flax with owning the looms on which workers span that flax into linen cloth, which the Welser then sold. The trend of the post-Black Death 14th and 15th Centuries was a concentration of resources – capital, skills, and infrastructure – into the hands of a small number of corporations.

The age of Amazon

Rolling forward to the present, there are some clear similarities. Certain large organisations have stepped up to the opportunities provided by Covid-19. In many countries across the world, entire ecologies of small restaurants, pubs and shops have suddenly been closed down. The market for food, general retail and entertainment has gone online, and cash has pretty much disappeared.

The percentage of calories that restaurants provided has had to be rerouted through supermarkets, and much of this supply has now been taken up by supermarket chains. They have plenty of large properties and lots of staff, with the HR capacity to recruit more rapidly, and there are many underemployed people who now want jobs. They also have warehouses, trucks and complex logistics capacity.

The other big winner has been the giants of online retail – such as Amazon, who run a “Prime Pantry” service in the US, India and many European countries. High street shops have been suffering from price and convenience competition from the internet for years, and bankruptcies are regular news. Now, much “non-essential” retail space is closed, and our desires have been re-rerouted through Amazon, eBay, Argos, Screwfix and others. There has been a clear spike in online shopping, and retail analysts are wondering whether this is a decisive move into the virtual world, and the further dominance of big corporations.